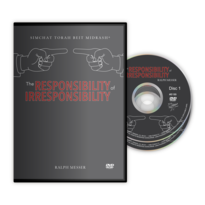 Life doesn't become a game until you start taking chances.

When taking a chance becomes a game to someone who is wealthy—or even a source of hope to someone who is poor—they are walking on thin ice in the world of responsibility. What will eventually destroy you is the need for taking chances in order to live. In fact, those same consequences you decided not to consider before taking a chance are simply the result of irresponsibility.

In life, it’s important to distinctly know the difference between playing a game and taking a chance. Truthfully, you don’t clearly know what "wrong" is until "right" has been defined. So, how is “right" defined? By laws and ethics that govern our actions, values, and behavior. When “right” is defined, it stops the proliferation of irresponsibility in your life. The knowledge of “right” is the wisdom of consequences. Coast along the fine line between entertainment and habit with Ralph Messer, as he begins showing the significance of learning your responsibility in having a habit of irresponsibility.